Kidney March is featured in the Springbank Park Newsletter! 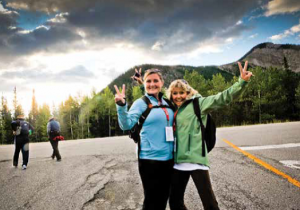 Kidney March isn’t a race, it’s about doing the most you can do. What is stopping you from making a difference? On September 6 -8th, 2013 over 200 people will lace up their walking shoes to march 100 kilometers, over three days, from K-Country to Calgary, in the fourth annual Kidney March. Hosted by the Kidney Foundation of Canada, Kidney March raises awareness and funds to support kidney disease research, patient support programs, and organ donation initiatives.

Kidney disease is referred to as the “silent killer” because most people are unaware they are at risk. It is a lifelong, irreversible illness, with no cure. 80% of Canadians waiting for an organ donation are in need of a kidney, and those affected by the disease are expected to double over the next ten years. Participants involved in Kidney March, including marchers, crew members, patients, and donors are taking one step closer in the battle against kidney disease. For the millions affected by kidney disease, failure is not an option. In the past three years over $2.3 million has been raised in support of kidney disease.

Jill Goth, who will be marching for the fourth time – her 400th KM, explains her experience in the event, “The thing I love most about Kidney March is that we are all just regular people making a difference. I am not an athlete and never thought I would be able to walk 100 kilometres over three days. However, on day three when I turned the final corner onto Springbank Road the feeling of accomplishment and exhilaration was life changing.”

To find out how you can support or donate to Kidney March, along with hundreds of participants in the impactful 100 kilometer walk over three days, please visit www.kidneymarch.ca or call at 1-866-956-2724.