Susan, mother of 3, marches for her daughters’ future

In September 2011, one year after undergoing my life-saving kidney transplant, I wrote the passages below about what motivated me to walk in Kidney March with my kidney donor (and sister-in-law) Marian Reich.

I am marching in the Kidney Walk to Calgary because

I believe research is hope. I believe in the power of research and in supporting a cause that makes a real difference in peoples lives.

Over the last 30 years, the Kidney Foundation of Canada has raised over $100M for research. That’s a huge number. Even more amazing is that it has been raised in communities across Canada by individuals like you and me — the families and friends of those affected by kidney disease. These passionate, determined people have held event after event, knocked on door after door,… year after year,… because they believed things could be better. They hoped that an investment in research would change things.

And it has. Research has led to improved quality of life, better dialysis methods, earlier detection and prevention, and for a lucky few, (13% of those diagnosed) a new lease on life through transplantation. If you don’t believe me, talk to your friendly neighbourhood nephrologist, he or she will tell you, as they have told me, what a difference the Kidney Foundation has made to advancing kidney research.

In 1977, Neil Everett McKenzie died in Toronto undergoing his 2nd failed kidney transplant. He was 55. He had been on peritoneal dialysis for what seemed to me to be a very long time. He wore a feather in his hat and always smelled clean. He took us for long drives through blue mountain and somehow made us feel like we were on a roller coaster. He teased and spoiled us horribly. He was a World War II Veteran and a determined man. He never gave up hope.

In 2006, Blaine Everett McKenzie died in Collingwood after a relatively short but painful battle with cancer of the kidney, liver and pancreas. He was 65. He was diagnosed with kidney disease in 1972 and received a transplant in 1975 which kept him alive for 31 more years — allowing him to finish raising three young children who loved him more than life itself. Probably because of his training as a marine engineer, his hand writing was unusually precise and beautiful. His laugh was deep and sincere, like his faith, our countless philosophical discussions over tea, and the love he had for his family and friends. Like his determined scottish father, he never gave up hope, not even in the very last days.

In 2010, I was given the gift of a new life through living donor transplantation. There are no words to thank the many people who supported and strengthened me through this part of my life’s journey. There are no words to thank the person who risked her life so I could have another chance at mine, no words to thank the individuals, my friends, who went through exhaustive testing, preparing themselves to take a huge risk to help me. I won’t waste this chance. It is time to act. This walk, like many other things we may choose to do in our lives to make a difference, is a tangible act of determination and an act of hope. Like my stubborn grandfather and father, I will never give up hope. I guess it is in the genes. You have take the good with the bad 🙂

I have three beautiful daughters who depend on this life changing research continuing. Like the hundreds of thousands who may be profoundly affected by kidney disease in the next decade, directly or indirectly, research is their hope too.

Now fast forward to today. If my past and present wasn’t enough, this year, I have even more reason to be involved once again.

In September 2014, Alexandra Hope Smith was diagnosed with kidney disease. Despite a family history of the disease, it was still a shocking diagnosis for a healthy young woman with no symptoms and her whole life in front of her. Though she was rarely ever ill or even unhappy for that matter, I have a vivid picture in my mind of the wee tot who looked a lot like tweety bird squeezing her big blue eyes in utter fear whenever we rumbled over the unpaved part of the road that led to our home in the country. I remember how bad I felt when I saw that terrified look on her little face, so I drove faster to get off the road and take the fear away.

And now, twenty years later, I have that same raw feeling of helplessness as I struggle to figure out how I can help take away her fear as she navigates this scary but all too familiar path. This time, I can’t drive faster or reach into the back seat to hold her hand and make things better. This time, I can’t drive off the gravel road. All I can do is face this family kidney curse again — head on — this time with my kind and beautiful daughter. Of course, we’ll do what we have to do and there will be a few tears, but we won’t stop to dwell on it or allow it to derail any of Alex’s hopes and dreams. We will shore ourselves up, ask lots of questions, and we will find the answers together. Love you Allie Cat. 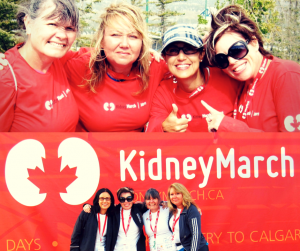