Kidney March Siblings were recently featured in the Calgary Hearld! 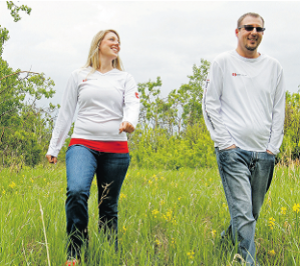 Michelle and Jason Hofer erupt into laughter when asked if they have a close relationship. The two joke back and forth about not being able to choose our siblings before Jason tells Michelle that she’s stuck with him for a brother — and you get the sense that she is more than OK with that.

“You never think you’ll lose somebody and thankfully we haven’t lost Jason,” says Michelle, 29, the younger of the two. “Still, it’s hard.”

Jason suffers from kidney failure and is awaiting his chance at a second organ transplant. Both siblings were diagnosed with Alport syndrome, a hereditary kidney disease, when they were kids. Their mom also has Alport syndrome, but is in stable condition. The illness, however, started shutting down Jason’s kidneys when he was 16.

“It’s definitely not fair,” Michelle says of the disease that has left her with very minor symptoms to date, but has turned her brother’s life upside down. At 24, Jason suffered renal failure. He has been on dialysis for the past eight years and currently goes for dialysis three times a week, spending four hours hooked up to a machine that removes waste and excess fluid from his blood.

One of his uncles donated a kidney in 2006, but Jason’s body rejected it, despite a year’s effort to try to save the organ with trips to the hospital and medication.The drugs caused avascular necrosis, which killed the bone tissue in Jason’s hips and shoulders. At 27, he underwent his first hip replacement. His other hip was replaced a year later and his shoulder joint was replaced in between the surgeries on his hips.

“You only have two options:deal with it or don’t. And not dealing with it really isn’t much of an option,” he says.

Once a promising young hockey player, Jason, 31, now has to limit his physical activity in the hope of extending the lifespan of his artificial joints, which is why his doctor recommended that Jason not participate in the annual Kidney March this fall. So Michelle stepped up and will complete the three-day, 100-kilometre trek through Kananaskis to raise awareness for organ donation and money for the Kidney Foundation of Canada.

The Kidney March kicks off Sept. 6 south of Calgary near Millarville, with participants walking about 30 kilometres each day, making their way toward the finish line at Canada Olympic Park in Calgary. Michelle has raised $1,600 so far, just past the halfway mark for the $2,200 that all participants are required to raise (her goal is $3,000). Jason has also raised an impressive $4,600 in a short amount of time. He will be volunteering at the Kidney March as a crew member so he can be on site to offer encouragement to his little sister.

“She’s doing this for me, so I’m going to be there for her.” She and her brother are most eager to raise awareness and money to fight back against a disease that has greatly affected their family — and countless other Canadians. According to the Kidney Foundation of Canada, one in 10 Canadians has kidney disease and many more are at risk. This adds up to roughly 2.6 million Canadians. Kidney failure can be fatal without intensive treatment — ongoing dialysis or a successful organ transplant.