Team Christina’s fundraising was feautured in the Medicine Hat News! 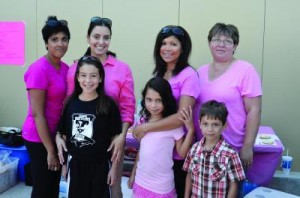 Voula Douvis has a strong motivation to take part in the 2013 Kidney March this September.

“A year ago, my daughter Christina was diagnosed with kidney disease,” she said. “Our lives have changed quite a bit.”

Christina, who is 10-years-old is now on a number of medications which affect her in different ways, and the family has to make a number of trips to the children’s hospital for regular blood tests.

The diagnosis inspired Voula to form a team with Dawn Hunt, Sonita Goehring and Lisa Perich to participate in the Kidney March from September 6-8 in Kananaskis. Douvis was out on Saturday with her team in front of Wal-Mart, holding a fundraising barbecue to raise money for the foundation leading up to the march.

“I am elated, it makes me feel special that I am doing something for kidney disease research and awareness,” said Douvis. “The community in Medicine Hat is wonderful.”

Participants in the march raise money for the Kidney Foundation of Canada, and walk from Kananaskis to Calgary, a distance of 100 kilometres to raise awareness of the effects of kidney disease. Douvis says she is worried about walking the distance, but is training in the coming months for the event.

“I am really excited to do something on behalf of my daughter and show my support for the cause,” she said.

Anyone interested in donating to the team can do so online at kidneymarch.ca, and searching for Team Christina.

To view the original article in all its glory, you can do so here