Thank You and Congratulations Mattamy Homes

Kidney March would like to congratulate and celebrate our Lead Sponsor, Mattamy Homes’ Calgary Division, for receiving this year’s National Special Appreciation Award from The Kidney Foundation of Canada. Mattamy Homes was presented with this award to thank and recognize their significant impact and contributions to The Kidney Foundation through Kidney March over the years. When 2020 forced Kidney March to pivot to virtual, Mattamy Homes continued their commitment to the cause. An event of this magnitude cannot succeed without the support of community partners like Mattamy Homes. Their commitment as a sponsor has helped Kidney March exceed its goals, creating more vital funding to meet the increased needs of patients and programs.

“Winning this award is truly humbling. We are so proud to be involved and we look forward to being involved for many years to come.” – Colette Showers 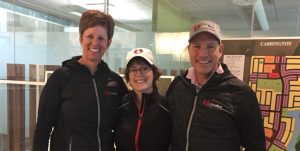 Kidney March welcomed Mattamy Homes into the Kidney March family in 2017, and they have stayed on board ever since. In those five years of sponsorship, Mattamy’s Calgary Division has donated over $33,500 towards Kidney March and played an active role. Mattamy’s employees have not only volunteered for Kidney March, but many have personally completed the 100KM challenge. When Mattamy Homes was looking for a new charitable opportunity to get involved in, they had no idea how many of their staff were directly affected or connected to kidney disease or organ donation.

At the core of Mattamy’s culture is their focus on community. “It starts at the top and spreads throughout the company. We want to focus our support on projects with big impact – projects where we can actually see the difference we are making, and that our people can get involved in.” – Don Barrineau, President of Mattamy Homes’ Calgary Division.

Mattamy Homes has been our camp spa and finish line sponsor for the last 5 years.
Keep an eye out for some fun to come from them in 2021!

• Mattamy has also sponsored many of the pathways we use to train on in our communities. In Calgary, you will find the Rotary Mattamy Greenway, a 145-KM pathway system that circles the entire city. Check it out and plan a route at: https://www.parksfdn.com/greenway

A special thank you to Kidney March Crew member Trevor Ferguson for introducing Mattamy Homes to Kidney March!
Did you know many of our sponsors have been introduced to Kidney March by Marchers and Crew? View our 2021 Sponsor Guide to learn more and contact us to discuss sponsorship ideas and opportunities.

Learn about the impacts made by your fundraising at kidney.ca-Our-Impact